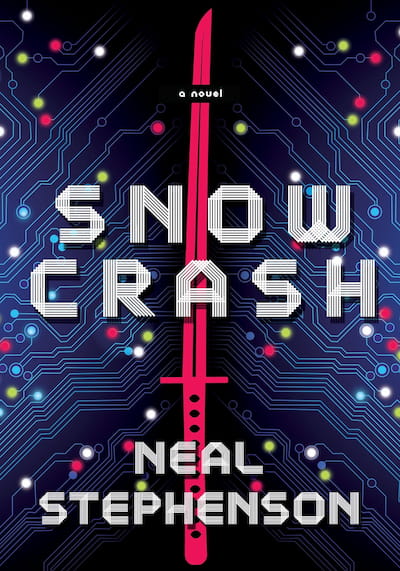 This is my review of the book Snow Crash by Neal Stephenson. The book that’s considered to be a cyberpunk classic. Is it good? Should you take the time to read it? Maybe.

The link above, as most other links to products in this article is Amazon affiliate – meaning I get a few % if you buy using that link, while the price stays the same for you (why I use Amazon affiliate links).

Like the picture above, depending on your taste and preferences, Snow Crash may seem to be trying a bit too hard to be cool. The main character is a hacker, who also fights exceptionally well with a katana! 14-year old me says WOOOOW COOOL! 🙂 The book was published in 1992, before any Kill Bill movies came out and samurai stuff became “pop-cultured.”

Our hero is called Hiro Protagonist. Yes, that’s pronounced as “hero protagonist,” get it? 🙂

I’m not a native speaker (and, obviously, a living proof that we did evolve from monkeys), so it took me a bit longer to get that – only later on in the book when another character’s name gets explained in a lot more idiot-friendly manner, did I get the main character’s name “wordplay.”

Throughout the book, the author gets a bit sarcastic and makes various kinds of wordplays. As if the book is trying to say: “while I do look like trying hard to be cool, I’m actually not taking myself too seriously, so it’s still cool.”

What about sci-fi? Well, I read Snow Crash after I had read William Gibson’s Neuromancer, where virtual reality (cyberspace) is colourfully depicted. Here it’s called “Metaverse” and he used the term “avatar” like it’s used today. The book is a teenage geek’s wet dream, so many tech people got inspired by it. I’ll get back to that later.

Having read the Virtual Light long before, this had no wow effect on me. But I’d call this book inspired by William Gibson’s work, not copied (Snow Crash came out a year before the Virtual Light).

The book’s setting is standard for cyber-punk: no real governments, everything is run by private corporations, including the police, with relatively poor living standards for most people, in spite of some high tech existing.

The main novelty and plot element is playing with the idea of brainwashing people. I won’t go any further on this to avoid giving any spoilers.

If you are very much into deep, complex characters, this book is not for you. Similar goes for many (most?) science fiction books.

Having said that, the main villain is the most bad-ass villain I’ve seen. Period.

OK, so who is this book for?

If you’re into cyberpunk, or computer-related stuff in general, not having read this book is a bit like having no idea who Michael Jackson is, if you are into music. Depending on how young you are, you may find some ideas and stuff to be new, exciting and, did I mention that: cool? 🙂