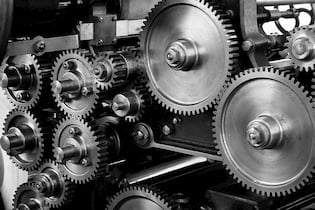 Long, long time ago, when God was creating this whole mess and distributing talents and gifts, she looked at the German tribes – primitive, no sense of humor, and language so crude it sounds like a drunk English sailor trying to chase the dogs away from their meat stew.

“Poor bastards”, thought the black bearded lady… “I know – I’ll grant them the talent of being brilliant engineers!”

Then she took a look at the Japanese: small country, small people, small penises… “hmm, sure – I’ll try the old engineering trick with these guys as well, they sure will need it.”

Being really uninventive, she did the same trick with the Brits, otherwise damned to live in probably the worst weather on Earth (and, being a woman, up to this day, she couldn’t decide whether a clover should have three, or four leaves).

The French and the Italians got to sing, dance, great cuisine – why they bother with engineering, after centuries of clear failure and poor talent, beats me.

Long story short, as she had made her round over the whole planet, she felt something being amis… “yes, the Serbs – almost forgot about the handsome devils! Ufff, it’s been a long day, running out of ideas…” So, as more of an afterthought, than a plan, Serbs got to be spiteful, live in poverty, and fight with all of the above mentioned. But to make things at least a little bit less hopeless, she granted them the talent of being able to fix everything the above noted engineers built, using zip ties, duct-tape, and WD-40. “They will be too poor to buy any new stuff anyway, so they’ll surely need it.”

That is why, today, if an Englishman manages to cook something that can be eaten even when one is not starving, they become famous. While, if you buy any Italian, or French made cars, or, God forbid, motorcycles, it takes no less than a Serbian wizard to keep it running (once all the needless extra parts have been thrown out and replaced with zip-ties).

or by shopping at